I had been thinking about trying a pop-up cupcake stand for quite some time. But just never got around to it. Well last week I tried it and I have to say it was a pretty good success. I wanted to see if a word of mouth, twitter, facebook approach would work. Viola! It did, with flying colors. 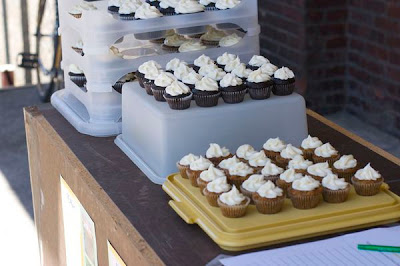 I sent out several emails to my friends and colleagues, I posted on twitter and facebook. I had a combination of 96 chocolate andcarrot, mini and maxi cupcakes. I sold about 75 in under an hour. It was so much fun, granted most of the customers were my friends that worked in the area. But several were not. One group that I didn't know, actually worked in my building heard about it from an email to one of my friends, that was blasted to her company, then forwarded to them. I love how that worked out. As a result one of the gals from that group follows me on Twitter and shared the photo I've posted. Fun! Thanks @tinyabstraction
I will definitely do this again, I may try to do it more regularly. It has really made me think about how I take more steps toward my goal of bringing people together with food. Do I need to get a cart and do this more formally or do I dabble in the pop up stands a little more. I'd love to have a little shop where I could bake in the morning and team build in the afternoon. Some day!
In the meantime, order up cupcakes for your next party, event or wedding.
Posted by Peach Cheesecake at 2:00:00 PM

Learn more about what I do.